When I was leaving my warm, sleeping fiance at 5 am, I was thinking “Why the hell am I doing this to me”. But I knew I wouldn’t regret taking that train to Wroclaw. So many people were excited about this conference that it just had to be great! ;)

Boiling Frogs is a Software Craftsmanship conference, which means it didn’t focus on just one technology or programming language, but rather generally on good practices when developing systems and managing teams. And that was great. There were so many different theme paths and topics, that everyone could find something interesting for him or her. That was the first time I took notes during the lectures. It helped me to focus on the topic and extract things worth remembering.

Fun fact – there were many women on that conference and that is really great! :) 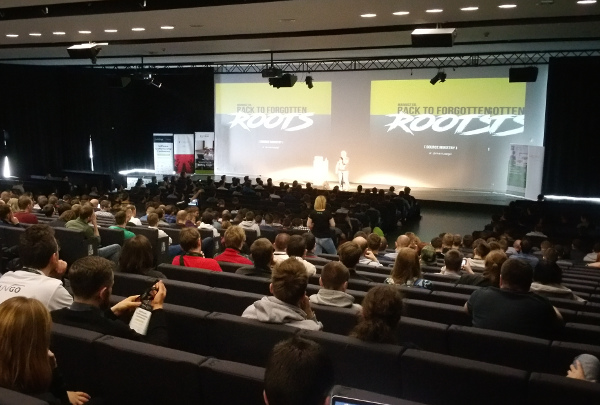 Back to forgotten roots

This was the first presentation that I attended, since I was a little bit late. It was such a great start! Lately all that I was hearing was: OOP is obsolete and passé! Moar frameworks! The so called “hype driven development” was driving me mad, frankly. I agree with everything that was said during that presentation:

These are tips that I caught and wrote down during the presentation, but I look forward to watch the video to hear all that wise things again. 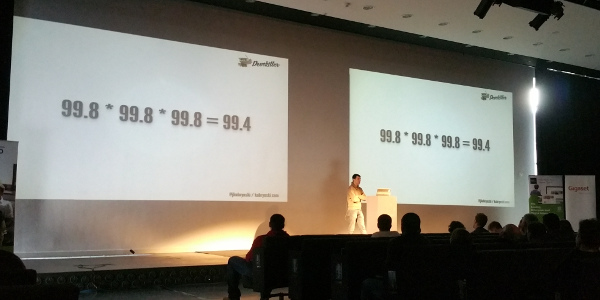 That was another great presentation. I’m not really into microservices for now, but if I was to maintain such system, I would really benefit from the lecture. Best part about writing blog posts – I can store safely thoughts that I might actually need in the future. :) The speaker was certainly very experienced in the topic of microservices maintenance and pointed out a few things to be aware of when dealing with them.

First of all, two things to remember when designing a microservice:

• team dealing with that service should be able to fill up on two pizzas,

One of the greatest advantages of creating microservices is their autonomy, as it greatly decreases the amount of problems connected with new releases. However, to be able to fully benefit from that, we need to utilize the power of CI (Continuous Integration).

Things to keep in mind when working with microservices:

• maximizing asynchronous communication between them,

• loose coupling of the components,

• e2e tests do not work in case of microservices, as it’s too hard to maintain a whole working system,

• keep in mind that there might be problems with performance, as it will drop in case of microservices (communication between them can cause it),

• this is why we need solid monitoring,

As this post started to swell, I decided to write another one about the rest of topics and overall impression of the conference. The last presentation that I attended was about Serverless Architecture, the thing that I was really interested in lately, so I took maaaany notes. ;)

This is the first post taking part in Get Noticed 2017 contest. I created a newsletter, so if you’re curious how I’ll manage to deal with the next 19 posts, subscribe! :)