Hi guys! That’s it – my 20th post in the contest series. I decided to prepare a thorough summary of the things that I managed to accomplish during these two and a half months, the new things that I learned during that time and my general impression and thoughts. If this is the first time you’re visiting my blog, don’t hesitate to check out the list of posts that I’m talking about.

Let’s start with the project progress.

Yep, my project is definitely not finished. I could say that the tool is in pre-alpha version – it has all of the functionality that I need for creating a proof of concept, which means it allows the user to design logical rules and export it in a format that will be used by the engine. I guess I sacrificed too much time into polishing the mini GUI library, but on the other hand it provided topics for several posts, that people actually found useful, so I guess I shouldn’t regret the time that it took. And what is more important – I’m planning on really extending its capabilities and using it in my other Unity projects.

The engine itself is currently in a heavy mess. I’m still trying to figure out the shape for my concept and I’m struggling with the strangely compiled Scala library that I need to use, so the progression is really slow. I was hoping that I would finish the core proof of concept till the end of the contest, but I guess that’s not possible. Well, I’ll just try to do my best to develop it as much as I can until the end of the month.

Obviously, since this is my master thesis project, I will definitely have to finish it, so stay tuned. :) 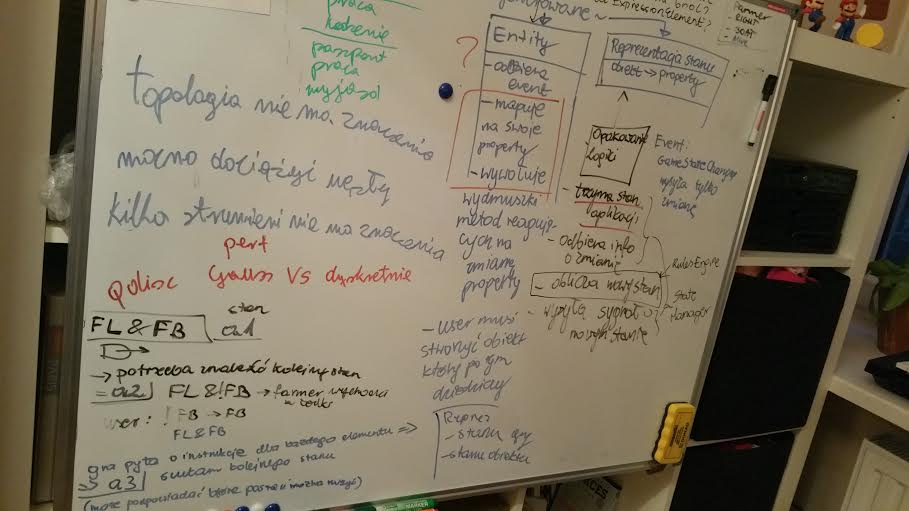 *One of the brainstorms on my beloved whiteboard…. ;) *

It was hard, really. Every post took me a whole evening or two, and that is only the time of creating the post, not coding the project. I guess that is caused by my posts convention – I wanted every one of them to have a special topic, which would provide some useful information for the reader. I didn’t want to simply write some loose thoughts about the project progression or the code that I wrote. Such posts are interesting for the people that follow the contest, but I wanted something more universal.

Since I’m not really taking part in the contest for the awards, you may ask what I gained in exchange for all that time that I sacrificed for running this blog. Well… Hell lot of things. ;)

That’s not a secret that I am quite a beginner programmer. I have ~3 years of work experience and I really feel that I know so little about the big programming world. That’s why I always tried to learn everything I could about the topic I was writing about, understand it and find an easy and straighforward way of transferring this knowledge to the audience. Sometimes I asked my boss for posts review and he really did provide some great feedback. So…

Lesson no. 1: There is always a piece of knowledge that you can deepen and share with others.

Before the contest I thought that I’m not able to provide any useful content, but I think that’s not true.

And of course – after writing twenty posts in English it’s becoming more and more easy and natural for me. I’m really happy that I have an opportunity of using this useful language in real life. 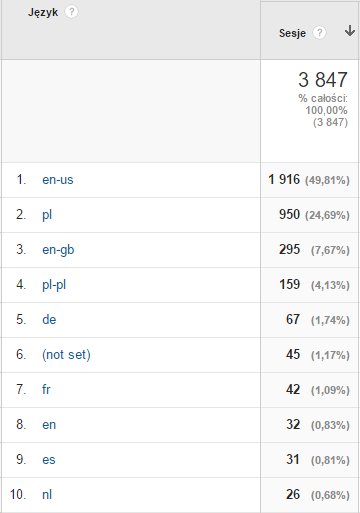 I created a fan page for my blog on Facebook and started using Twitter and Reddit as channels of promotion for my blog. I guess not using these types of social media earlier was a big mistake – it’s full of interesting content, significantly less cluttered than the Facebook wall. I gained some followers, so I guess it will be a little easier in the future to promote new content.

But what’s more important – the Slack! I had so much fun discussing all kinds of topics with other contest participants. I also got a lot of help and invaluable tips on how to deal with hosting, promote the blog or improve posts. This little community is so supportive! That is even more impressive when you realize that in theory we are all competing, yet I never felt it like that. We reviewed each other’s posts and everything ran in a nice, friendly atmosphere. I know that it sounds like an impossible utopia, but it really was like that!

I really hope that we’ll connect with each other in real life and will have some beers! ;)

Lesson no. 2: Get out of the shadow and you’ll find many awesome people, sharing the same interests as you.

I really like my blog, seriously. I’m excited that soon I will be able to write posts on all topics that I’m interested in, for example some reports from conferences, game jams, etc. Twenty posts seem like a solid start, I would never produce this amount of content in such a short time period if it wasn’t for the contest.

Some of you may wonder, why did I have an azurewebsites url at the begging. Well, I hosted the site on Azure using a Dreamspark subscription, because there is an additional reward for one of the blogs that do that… xD And that was going well until the first peak visible on the following screen:

This is how my blog was doing through the last three months. The higher peaks are simply the posts that I put on subreddit r/programming. The first one was caused by an upvote from Andrzej Krzywda and this is the time when my subscription turned my website off. :D The second highest peak is the time of post about shared repositories in Git and that is my personal achievement, because this time my article was appreciated by the subreddit community. 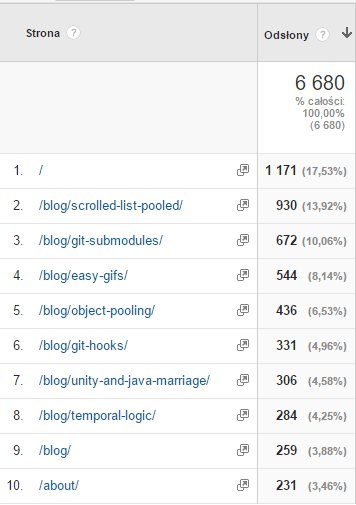 I have to admit, that I promoted the Scrolled List Pooled post using every promotion channel that I could think of, I also had great support from my coworkers and - of course – Andrzej Krzywda’s upvote did the job (although I got heavily downvoted xD ).

Lesson no. 3: Always post your programming-related, written in English articles on r/programming. Also, try to be active in other topics to gain reputation.

I upgraded my plan into a costly one, but since I couldn’t find a way to set up a cost alarm I was constantly worried about the bills. That is why I decided to move to DigitalOcean, where I had a nice amount of credits from the Github Pack. Two days after the migration my credits expired… xD But I decided to stick with it. At least it has cost alarms.

Lesson no 4. : Watch out for pictures weight, gifs are particularly bloated (data transfer caused most of the expenses when I was using Azure).

I have to admit that writing two posts weekly was a great challenge for me, as I was also working full time, studying and doing other awesome things (like participating in a public dancing show ;) ). I am so happy and proud of myself that I persevered in this decision, but I’m also relieved that it is over. :D Now I need time to catch up with all the studying- related things that I’ve fallen behind with…

But I will say that again – totally worth it! Thank you, Maciej Aniserowicz, for bringing your fantastic ideas to life and being so supportive during the whole contest period! <3

Lesson no. 5: When you participate in awesome ideas, awesome things happen!

Translation:
Picture good for the hype, should catch up
lans-driven blogposting == good picture and some good slogan