Hi guys! Long time no write, but the good part is that I finally managed to finish working on my master thesis and now I’m waiting for the final exam. Since the last post I’ve collected many different ideas for blog posts, but right now I feel that I just have to write something on an excellent event that I participated last weekend – Programistok.

The conference took place in the Bialystok city. This city is considered as the capital of multiculturalism in Poland – it’s where the creator of Esperanto language was born. The idea of Programistok was to create an event for people, who code in different languages – C#, Python, Ruby, JavaScript and so on, as usually programmers conferences are connected with one field of technology. I really love how this idea suits the spirit of Bialystok. Oh, did I mention that Bialystok is also my home city? ;) As I asked many participants about their impressions of the city, almost all of them mentioned the food. One said that he’s impressed that we have so many different, special dishes connected with potatoes. I responded: “Whaat? No, we only have potato cakes, potato pancakes, potato gut, kartacze…”. :D

The heart of every conference is consisted of people who share their knowledge. This time there were some really solid points in the agenda. From the begging the was no time for boredom, as the first was speaker was Gynvael Coldwind, leader of one of the best CTF (capture the flag – security contests) teams in the world. He showed us what are the dangers of integer overflows during the password verification, but some of the examples were kind of far-fetched. For me, more enjoyable was the second part, where he showed some security gaps that he found on the Prezi website. I really wish he had more time to talk about everything he had prepared for the talk. 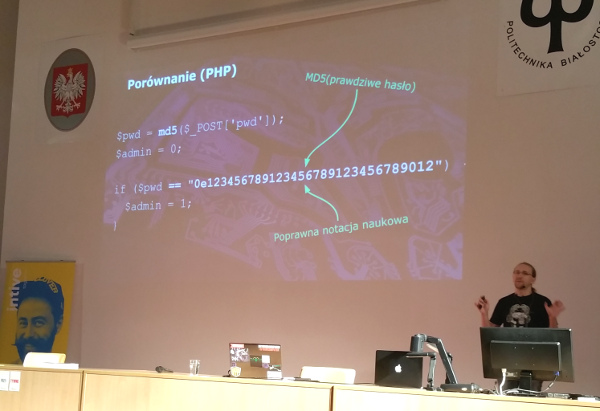 The next one considered machine learning using the R language. Basia Fusińska introduced us into the basics of data manipulation and run some R scripts. I’m really familiar with this topic as I did many projects and laboratory exercises doing the exact same, or more advanced things, so this wasn’t really helpful for me. However, I believe there are many programmers without the academic background, for whom this was a nice introduction.

The last talk before lunch had an intriguing title “Let’s hack an Android app…”. I was listening really carefully, to get to know some technics of strengthening our android builds at work. Michał Szczepanik showed us how to use Drozer to omit the password verification in a simple app. I was shocked that this can be so easy if the app isn’t well secured. I’m planning to check what can be done with our games’ apks using that tool. ;) Michał also talked about the website that lets you reverse engineer a Java application. That tool however wasn’t able to decompile our Unity app, I wonder why. To sum up – that talk was really great and I learned a bunch of practical tools. This is an example of a perfect, 45 min presentation for me – a little, concrete, useful piece of knowledge, provided with great examples, simple enough to understand as a noobie, but also complicated enough to show the point.

After the lunch there were lightning talks – 5 minutes presentations, where everyone could talk whatever they wanted about. Funny, entertaining and there was even some charity involved. 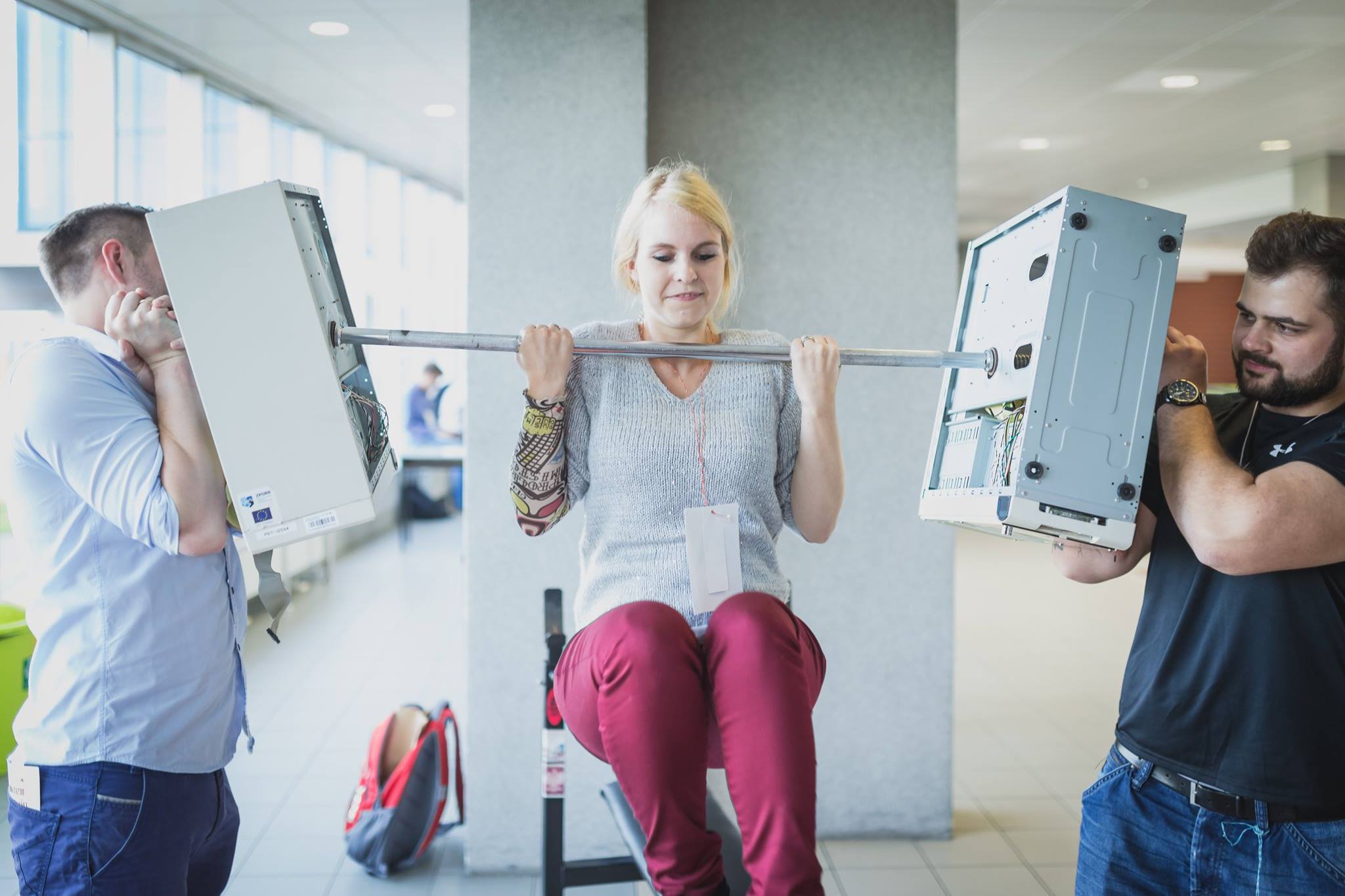 I had to unload all that positive energy somehow… ;d fot. Maciej Korsan

The next talk took us many years into the past, as it was about the raster shaders for Commodore 64. Although I really admire people who had done amazing things with that 64 kb of memory at that times, I’m also a fan of moving on. I don’t really feel this excitement of seeing some colorful stripes on the screen. I have to admit that I felt kind of sleepy on that presentation, but the next one has heated up the atmosphere. In the room full of Git extremists, programming purists and pedants, the man stood and told that GIT BRANCHES ARE EVIL and that he has lived free from them for 6 years. :D Łukasz Szydło had some hard time explaining his concept of feature switches in the code and discussions over that topic lasted even on after party. I personally found this concept really interesting, as I see a great potential for using it in my game servers. Having one website controlling the whole set of features, that lets you turn them on and off whenever it’s needed sounds really compelling. He also showed a clean way of doing that without polluting the code too much. As I’m also not a fan of creating dozens of branches, I didn’t feel as offended by this talk as some of the participants. Good job Łukasz, great presentation! (and he also has five kids, that brave man!)

Finally – the last talk. The one that I was really looking forward to, as I’m planning to have some fun with React.js in the near future. Marcin Grzywaczewski did a really smart thing – instead of showing the things that could be found in one of many Getting-Started-Tutorials, he talked about the community, about the problems connected to React, about the solutions to that problems. I finally have a better understanding of what React and Redux are, and what they are not. That was a great final for the great agenda.

If I was to pick my favorite talk… I just couldn’t. 4 out of 6 talks were one of the best presentations that I listened to on all conferences that I’ve participated so far.

Bialystok is not a big city and it’s located in the eastern part of Poland, which is considered as not so developed as the other parts. This makes me even happier, that this conference gathered people from the whole Poland (and even people living abroad) and showed them, how amazing and professional things can happen here. The catering was perfect, for the lowest ticket price ever there was even lunch provided. There was a possibility of remote work at Friday for people who wanted to arrive a day before, there was before party, after party… Lots of networking and communication. And the atmosphere! Conferences nowadays try to break the stiff atmosphere with pizza and beer, but on Programistok you could experience the true tribute for our nerd-ish roots – the programmer’s basement and the trailer were just perfect. Also singing programmers songs in one of the biggest clubs in the city – priceless! So much fun and so much knowledge in one day – that could happen only on Programistok. ;) So if you think that it’s not worth travelling so far – we have good roads and fast trains, so don’t hesitate and come to Bialystok in the next year! 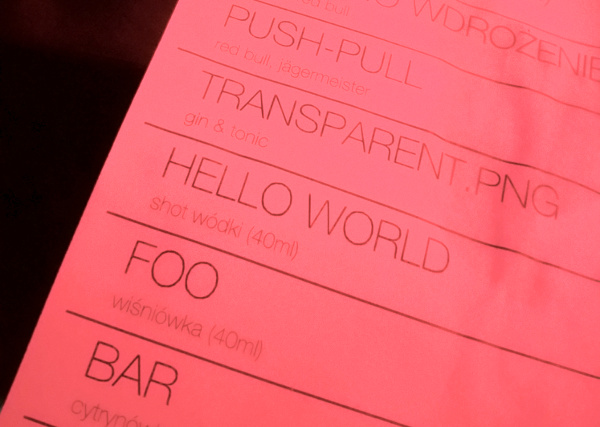 Below you can find links to presentations:

Basia Fusińska about IT - “Clean, Learn and Visualise data with R” [ENG]