Hi guys! I haven’t written anything for so long, because there were many interesting events on the way – I finished school (well, almost – I still have to write my master thesis ;) ) and I’ve taken part in a cool game jam in the castle. Sounds great, doesn’t it? It’s been a whole week of coding, making friends and getting to know Sweden, so I decided to dedicate three separate posts to that topic.
This one will be covering an overall depiction of the event, the next one will address our core activity – creating the game. And in the last one I’ll try to present for you some of the most interesting games that were created during that week. There’s much to write about, so let’s get started! :) 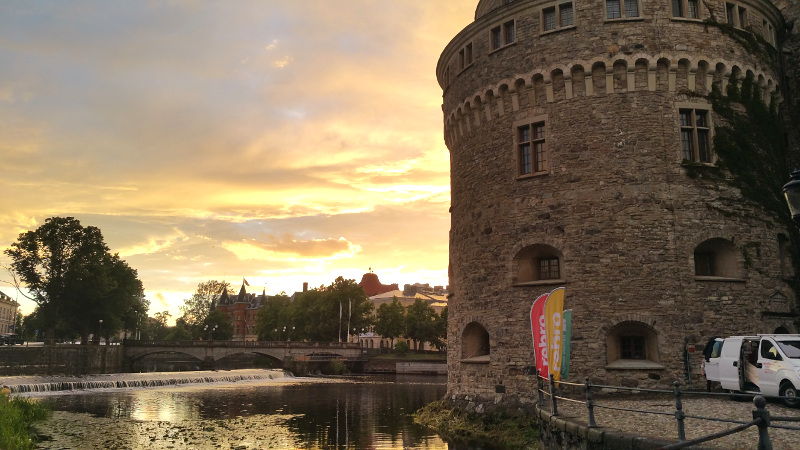 What is Castle Game Jam?

Castle Game Jam was a game jam that took place in the castle. ;d What the game jam is? It’s basically a hackathon, where the games are being created. In contrary to traditional hackathons, game jams gather people of many professions – not only programmers, but also graphic designers, game designers, musicians – all of the people who have anything in common with game dev. The idea of spending a week in a beautiful castle in Sweden was so tempting, that there were also some people who just wanted to have fun, despite the fact that they aren’t really that much interested in the sole creation of games! (My fiancé, for example ;d) 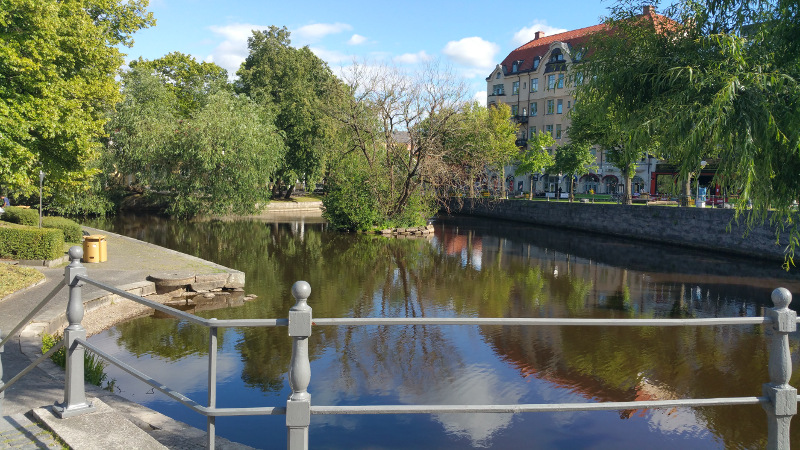 The whole event took a week. I think that was a perfect amount of time. Enough to make a decent, playable game, along with getting enough sleep and enjoying some other attractions, such as sightseeing and playing console games. I have already taken part in many other great game jams for example Slavic Game Jam or PolyJam which were a 48h jams, so everyone was crunching and not taking shower nor sleeping – so after the event I was always exhausted. Castle Game Jam felt like vacations. 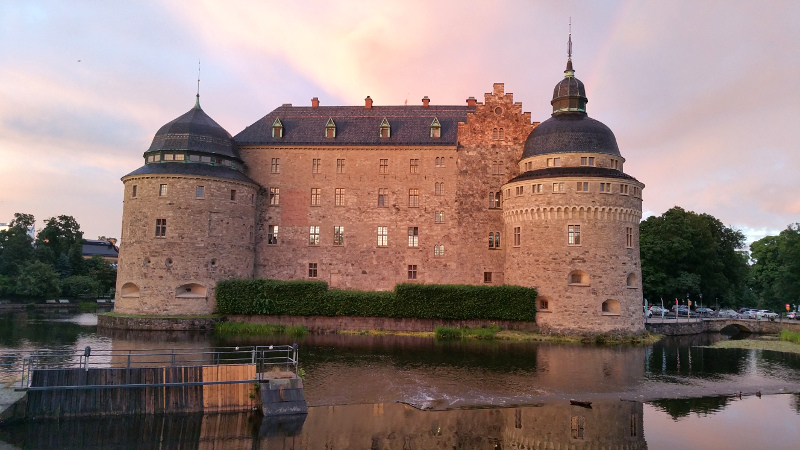 The title castle is located in a small city called Örebro and I have to admit – the building and the whole place is so charming, I couldn’t stop taking photos. It was so great to be able to sit in such a cool place and code. There were even cute mice in the building! ;)

Over 20 people from Polygon - science club devoted to creating games – were travelling together from Poland to Sweden. That was kind of challenging logistically, but we managed to split only once (half of us missed one train). The whole travel took us over 12 hours and involved using all kinds of transport – car to the airport, plain to Skavsta, bus from the airport to the nearest town – Nykoping and two trains until we finally arrived at Örebro. We had lots of fun during this journey – we visited a city called Vasteras, which inspired us to sing the GoT theme at the station. ;d Unfortunately, we missed the before party and barbecue because of that. 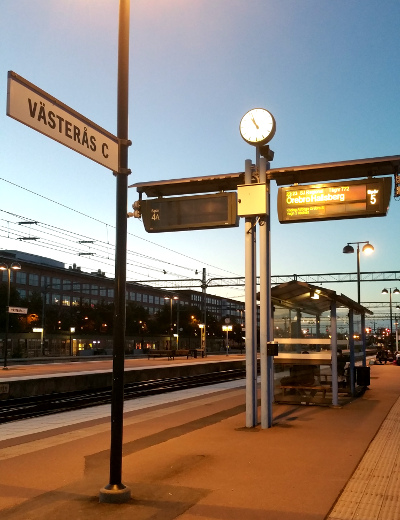 The first day consisted of many short talks, connected to game dev on many different ways. This was the perfect begging of the week, since it was very inspirational. One of the most interesting lectures was The Art of Letting More People Play Your Game which addressed the problem of not paying enough attention to adjusting the game for different people – with impairing hearing, color-blinded etc. That is the reason why many games exclude many potential receivers at the very begging of the game. 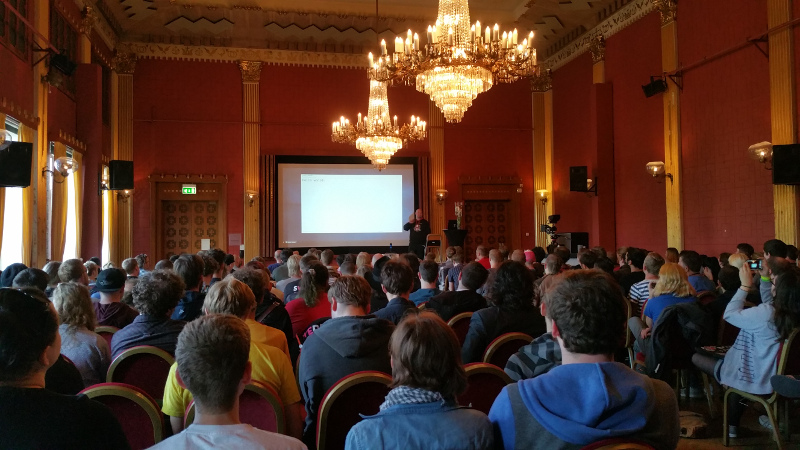 Our team could greatly benefit from the talk VR: Today and tomorrow, since we were going to create the game for Google Cardboard and Gear VR. It made us pay more attention to designing the game in such way that it wouldn’t induce motion sickness in the players. This talk was really technical and educational.

I also really enjoyed The demoscene. Cracks, hacks, phreaks & gods since it felt like the time travel to the times, when I was too young to be aware of the things that were going on in the IT world. It’s so inspirational, learning what people could do back then with such limited resources! And I finally got to know what the „demoscene” is. :)

This were some of the talks I personally attended and remember the best, but the event was full of great talks and workshops. The location was impressive too, since it all took place in the Elite Hotel. At the end of the day there was an official keynote announcement (well, keynotes, since there were many). That was the worst part – the host was talking about many, many things, mostly connected to the event organization – the information that I heard just a moment earlier during the special talk on that topic.

After the keynotes were finally presented, we had to hang around for a few hours, since the castle was still being prepared for us. It was really worth waiting. Everything was totally well – designed, I loved how spacious the place was and comfortable it was to code there. We got a really nice, calm spot and I loved being there, surrounded by all this great paintings. 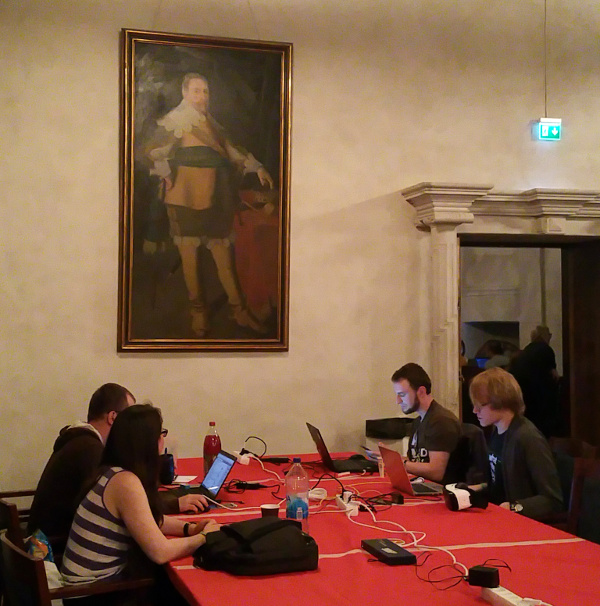 The only problem was the Internet - I got used to this, as it happens on every jam, but in Poland I usually set a mobile hotspot in my phone. Well, at least we had a good excuse for playing console games in the fun room. :D

I have to say that the atmosphere was great. This is the perfect type of contest for me – no materialistic rewards, no negative competition. People were friendly and helpful, we got help with creating 3D models and one guy even created music for us. :) We also had a chance of trying voice acting, as we were playing angry hotel guests for Breach and Clean. Our game got much attention too – during the after party I heard people say “Oh, you did this? I heard about it but didn’t get a chance to try it out!”. Our game… I’m really proud of it, but that will be the topic of the next post. :)

The culmination was on the Saturday, when people from the town gathered in the castle to try our games. That was simply great. It was tiring, since we had some people trying our game all the time, but also so satisfying – most of them really enjoyed it, especially children. :) It was really uplifting seeing so many families come and play these little productions. We also gathered some feedback and had a chance of observing how non-dev people are reacting to our game. 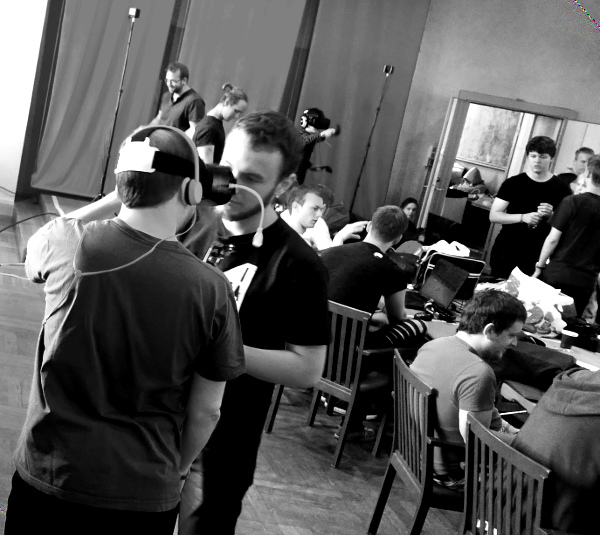 For me, that Saturday was the best reward!

I’m really thankful for organizers (well, for James, as he was mainly responsible for the whole event) for providing us free accommodation and showers. That allowed me to visit Sweden and take part in that great event – I could never afford paying for a room. I also really admired volunteers - they were working really hard, for several hours a day! Thank you so much guys! 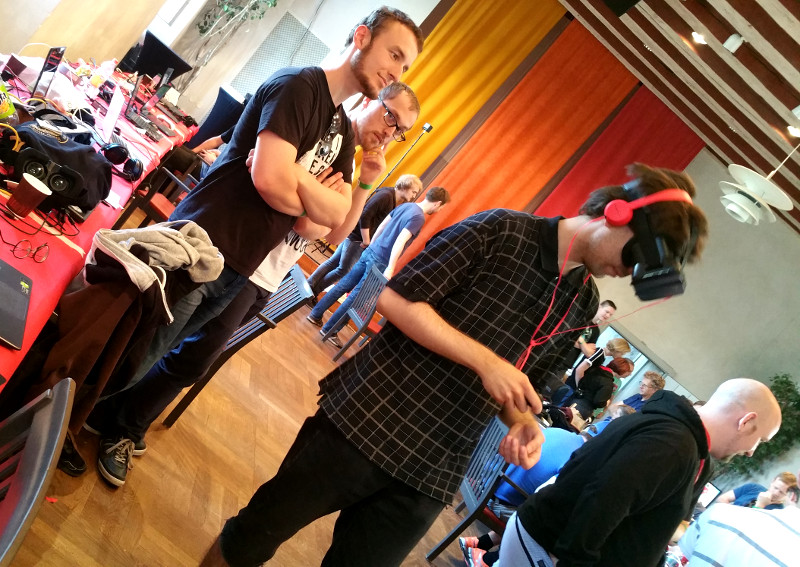 It was a really great week. I got to know a little bit of Sweden, talking to people from many different countries was also a great experience. Since we had so much time and really limited set of features to implement, we didn’t have to crunch and had time to sleep well and have fun, so I felt like on vacation. I also fell in love with Sweden – so many beautiful cities! Örebro was amazing – as one of the jammers said “Everything looks like a fcking post card”. :D 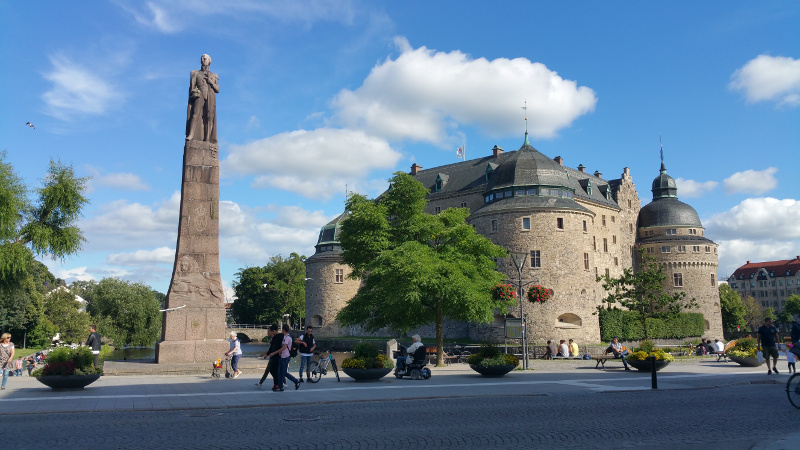 I would definitely recommend to all of you taking part in the next year’s edition, even if you’re not creating games on daily basis. In fact, in our 5 members team only I am working in game dev and I think we all had fun.

Thanks for reading – in the next post I will tell you all about our game and the process of creating it. :) Stay tuned! If you’d like to get notified when future ones appear, like my fan page or follow me on Twitter. (｡◕‿◕｡)